With two working Nunchuks connected to our Arduino (see last post), we could continue building our RC controller.

We grabbed MultiWii v2.2 from here (the latest release as of this writing), and examined it to determine what kind of RC input it expects. MultiWii expects RC serial messages to contain 8 16-bit integers containing values between 1000 and 2000. PWM signals for servos and ESCs typically vary between 1000µs and 2000µs. Presumably, the RC values are simply the pulse-widths which would be read from the PWM input if the quadcopter was being controlled by a traditional RC radio. The 8 signals are: roll, pitch, yaw, throttle, aux1, aux2, aux3, and aux4.

In our case, the Arduino simply maps the 4 Nunchuk axis onto roll, pitch, yaw, and throttle. We used the normal axis layout for RC helicopters, known as Mode II.

The single complication in this part of the code is the throttle axis. In RC radios, the throttle is at rest at the down position, whereas the other three axis are at rest at the center position. Furthermore, the throttle in RC radios is not sprung, so it does not return to its rest position on its own. We would need to modify out Nunchuk to make the throttle operate in this way. We can compromise however, on the zero-point. We mapped the throttle such that only the top half of the stick is the active range, as shown: 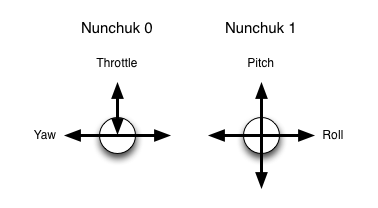 This makes the throttle behave more like an RC radio controller.

As an optional safety precaution, the throttle is only active when both Nunchuks' Z buttons are held down. We chose to do this because it is so easy to accidentally bump the little Nunchuk joysticks.

The configuration program assembled these messages using the following function:


The MSP message which sends RC data is called MSP_SET_RAW_RC and has message type 200. It is composed of 16 bytes which represent 8 16-bit integers. We trivially translated our control signals from Step 1 into an array of bytes, and send it using the function above. For now, we're sending zero for aux1-aux4.

When our control board arrives we will test and debug our code, and post a complete Arduino sketch.
Posted by Unknown at 20:57